Today there are two treatment options for people who have been diagnosed with a brain aneurysm.

It is important to note, however, that not all aneurysms are treated at the time of diagnosis or are amenable to both forms of treatment.  Patients need to consult a neurovascular specialist to determine if they are candidates to either treatment.

A less invasive technique called endovascular treatment,does not require a craniotomy.  This technique uses existing spaces within the artery to deliver implants that can seal off the weakened aneurysm wall from any further contact with pulsatile arterial blood flow.  Access into the blood vessels is via a small incision at the groin crease.  Under X-ray guidance, a microcatheter is used to reach and deliver coils into the aneurysm to induce stagnation of blood flow in the sac, leading to thrombosis (clotting) of the aneurysm.

Endovascular treatment sometimes requires the use of an additional device such as an intracranial stent.   This device enables treatment of a broader scope of aneurysms that may be difficult to treat with coils alone.  Stenting with coiling utilizes a small flexible cylindrical mesh tube that provides a scaffold for the coiling.

Lower porosity stents or flow diverters achieve aneurysm occlusion without placing coils into the aneurysm sac.  These devices function by redirecting flow to stay within the parent vessel, also inducing thrombosis in the aneurysm sac. 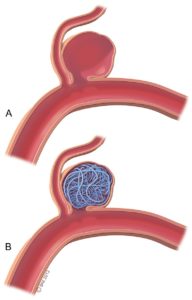 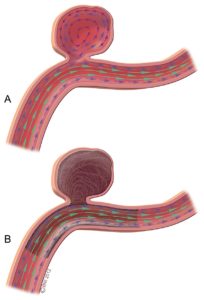 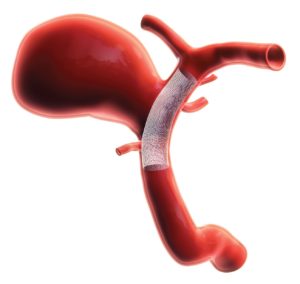 Although the frequency of certain complications may vary, both clipping and coiling have risks.  Aneurysm rupture is the most serious complication of either treatment.  Rupture can cause intracerebral hemorrhage (bleeding into the brain), subsequent coma or death.  Ischemic stroke, which is a stroke caused by small emboli in the bloodstream, is also a potential risk of either treatment.

Which procedure should I have?

Results from the International Subarachnoid Aneurysm Trial (ISAT), a randomized control trial which compared surgical clipping to endovascular coiling in the treatment of ruptured aneurysms, were published in the Lancet in 2002.  The study found that in patients equally suited for both treatment options, endovascular coil treatment produced substantially better patient outcomes than surgery in terms of survival free of disability at one year.  The relative risk of death or significant disability at one year for patients treated with coils was 23.5% lower than in surgically-treated patients, an absolute risk reduction of 7.4%.  The study results were so compelling that the trial was halted early because the trial steering committee determined it was no longer ethical to randomize patients to clipping.

Although no multi-center randomized clinical trial comparing endovascular coiling and surgical treatment of unruptured aneurysms has yet been conducted, retrospective analysis found that endovascular coiling is associated with less risk of negative outcomes, shorter hospital stays and shorter recovery times compared with surgery.

Factors other than aneurysm anatomy are also important, including age, clinical grade, comorbid medical conditions, and aneurysm location.  While largely unstudied, the less invasive nature of endovascular coiling is likely to be favored with older age, poor clinical grade, serious comorbid medical conditions, and certain aneurysm location (e.g., basilar tip).  Despite the continued evolution of endovascular techniques (e.g., stent-assisted coiling of wide-necked aneurysms and flow diversion), however, some ruptured aneurysms may not be favorable for endovascular coiling.  For aneurysms with favorable anatomy for coiling, however, the arguments for primary surgical clipping continue to fall.

Although unresolved controversies remain as to the best treatment option for an individual patient, both surgical clipping and endovascular coiling are considered to be viable treatment options in the management of cerebral aneurysms today.