A useful understanding of your brain aneurysm, management options as well as what the future holds takes a little bit of homework. This may be the first time you have ever read about brain diseases.  As with many other disciplines, there are a few basic terms and concepts that should be understood prior to any type of meaningful conversation with your physician.

Brain arteries:  These are essentially pipes that transport blood, pumped by your heart to your brain.  As you might imagine, they are lined with a muscular layer to help maintain the pressure of the blood such that the furthest regions of your brain can get a steady stream of blood.  The cells that make up the wall of the artery are not static.  In fact, these cells are constantly growing and remodeling in response to the pressure from the blood to attempt to maintain, as much as possible, a smooth cylindrical shape.

Brain veins:  Veins are thin-walled vessels which lack a muscular wall that drain blood after it has passed through tissues or organs.  After they have passed through tissues or organs, they lose oxygen and are under very little pressure as it returns it to the heart to get pumped to the lungs.  Veins outside the brain are usually more visible as blue vessels near the skin surface.

Brain aneurysms:  When the cells that line the walls of arteries are not able to effectively maintain a smooth, cylindrical shape, the blood pressure within the arteries causes a bulge.  Over varying amounts of time, the bulge may grow into a sac, or an aneurysm.  Therefore, you are generally not born with brain aneurysms.  As you might expect, they tend to occur on the outer curve of vessels or at branching points.  Furthermore, because of the anatomic configuration of the major arteries at the base of the brain, aneurysms occur in fairly predictable locations.  The reason why we worry about aneurysms is because the wall lacks the normal muscular layer which may then allow spontaneous rupture of the wall when the force of the pressurized blood in the artery exceeds the tensile strength of the thinned artery wall.

Unruptured brain aneurysms are usually without symptoms, particularly when they are small.  Large unruptured aneurysms may cause symptoms by compressing surrounding structures, including brain tissue or nerves.  Symptoms may include pain above and behind the eye, numbness, weakness or paralysis on one side of the face, dilated pupil or vision changes.

Brain aneurysms are a problem with the arteries, which transmit blood under pressure, pumped by the heart, as opposed to veins, which transmit blood under very low pressure after it has passed through your tissues or organs.  As such, when an aneurysm ruptures, blood enters, under considerable pressure, into the fluid space that normally surrounds your brain.  Because the skull is a fixed volume in adults, even a small increase in volume within the skull (blood, in this case), quickly increases the pressure within the skull.  This mechanical pressure can damage the brain by having a squeezing effect, otherwise referred to as mass effect.  In more severe situations, a part of the brain may squeeze (mass effect) into a space that it shouldn’t be in.  The severity of this mass effect initially is an important determinant of how much neurologic injury a patient will sustain.

As mentioned, earlier, blood enters under pressure into the (spinal) fluid space that normally surrounds the brain.  Under normal circumstances, spinal fluid has a vital role in maintaining normal health and function of the neurons in the brain, and as such, does recirculate.  About a soda can of spinal fluid is formed each day (very slow rate) and gets reabsorbed into the veins at certain locations.

Depending on how much blood enters this space from the ruptured aneurysm, spinal fluid may not be able to drain normally.  As a result, spinal fluid builds up, further increasing the pressure within the skull.  This is called hydrocephalus, and may be a reason why you need a drain in the first day or so, and why you may need a permanent drain (shunt) to provide an alternative drainage route for the spinal fluid that continues to be produced by your body.  Untreated hydrocephalus can contribute to disability.

The major blood vessels at the base of the brain that are most likely to develop aneurysms are suspended within the spinal fluid with little supporting tissue surrounding it.  As such, when an aneurysm ruptures, blood actually surrounds the surface of these blood vessels.  This blood settles, coagulates and then the body through several reactions, tries to clear this blood.  As the blood is “digested” by the white blood cells in the body, some of the by-products may be irritating to the normal surrounding tissues, including the arteries in the brain.  The normal muscle layer that makes up the wall of the artery may become irritated by this blood and contract, narrowing the vessel, compromising blood flow to the brain.  This may lead to ischemic strokes, or brain injury from insufficient blood flow.  This is yet another factor that may contribute to neurologic disability.

There are several other processes that occur including seizures, infections, blood clots in the legs, and heart problems, among others.  The prolonged intensive care unit stay, often around 2 weeks, also takes its toll on your overall medical health.  Frequent neurologic exams in the intensive care unit significantly disturb sleep.

During your follow-up visit, try to ask you physician, who knows your particular case in detail, to explain what went on when your aneurysm ruptured.  Hopefully by then, you’ll begin to have a better sense of what to expect in the future. 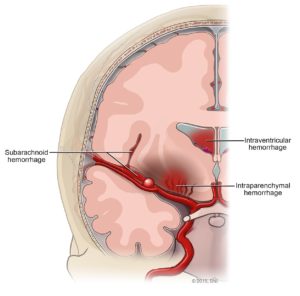 How are Brain Aneurysms Diagnosed?

Aneurysms can be diagnosed in several different ways.  Diagnosis of a ruptured cerebral aneurysm is typically made by finding signs of subarachnoid hemorrhage on a CT scan (Computerized Tomography), which is a computerized test that rapidly X-rays the body in cross-sectional slices.

To determine the exact location, size and shape of an aneurysm, three options are available.  Computed Tomographic Angiography (CTA) and Magnetic Resonance Angiography (MRA) are non-invasive options.  Cerebral catheter angiography is the third option, considered both the gold-standard and invasive.

CTA combines a regular CT scan with a contrast dye injected into a vein.  Once the dye is injected into the vein, it travels to the brain arteries, and images are created using a CT scan.  These images show exactly how blood flows into the brain arteries.  MRA is another technique to image blood vessels which uses magnetic pulses rather than x-rays.  MRA may not be safely performed in certain patients with specific metal or electrical implants in the body.

Cerebral angiography provides the highest spatial resolution of the three options and also provides an opportunity for endovascular treatment.  It is a procedure in which contrast dye is injected into the arterial system through a catheter that is typically inserted through an artery in the groin.